Located close to the port city of Arica, the Cristal Copper Project is situated in northernmost Chile, adjacent to the Peruvian border. Covering the northern end of the famous West Fissure fault, also known as the Domeyko Fault, the claim area is highly prospective for large, buried porphyry copper deposits. 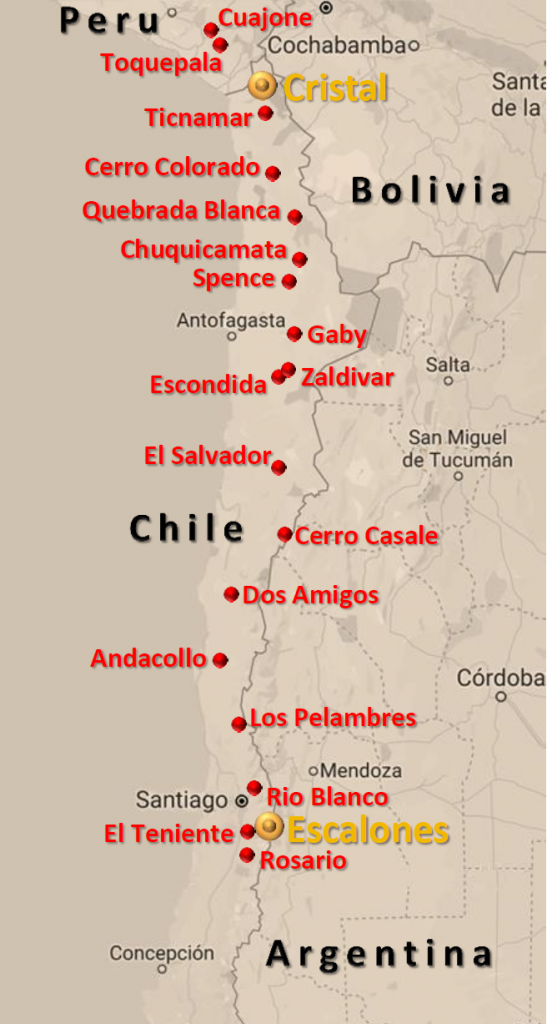 The project is easily accessed from Arica to the west, or via highway 135 from the north or south. Also known as Ruta 5 135, or the Pan-American Highway, this highway runs from the Peruvian city of Tacna (approximately 58km north of Arica) all the way south to the Chilean city of Copiapo; a total distance of approximately 1,298km. With 9 square kilometres’ of concessions, our Cristal Copper asset is situated on public land in a region of northern Chile that is supported by excellent infrastructure.

Prior exploration work was carried out in the area during the 1990s by various companies, although the first significant work on the Project was conducted by BHP Billiton (“BHP”) under an option agreement in 2012. The area has extensive post-mineral cover rocks, and therefore exploration was mainly geophysical with limited drilling of widespread holes. Although the results of these initial airborne magnetics, gravity and EM studies, along with the limited drilling, were prospective for the potential discovery of a buried porphyry copper deposit, no exploration work was conducted on the property since this time.

Wealth Copper plans to follow up on this initial exploration work, focusing on the area where a large geophysical anomaly was previously identified. The Project is currently surrounded by large land positions held by several senior copper producers.

The coincident anomalies exist within close proximity of where traces of the West Fissure undergo an abrupt change in direction from north-south to northwest, at the intersection of a northeast-southwest regional structure.

The Company has proposed an Initial Project Exploration Program, which will begin with a drill program. This initial drill program will comprise of 4-6 holes to test the principal target: the gravity high, magnetic low that was not tested by previous drill holes. Total budget for the program is estimated to be between USD $1,000,000-$1,500,000. The company anticipates that an all-in cost of approximately USD$250 per meter will cover the necessary permitting and ancillary costs of the Initial Project Exploration Program.

Significance of the west fissure fault in Chile

The West Fissure Fault is an essential branch of Chile’s Precordilleran Fault System and runs in a North-South direction. The Precordilleran Fault System (also known as the Domeyko Fault, or Falla Domeyko in Spanish) is a geological structure that runs along the length of the country and parallel to the Atacama Fault. Many of the world’s largest porphyry copper mines are located along the West Fissure Fault, including the Chuquicamata copper mine (currently the world’s largest open pit copper mine by excavated volume), Collahuasi, El Abra (operated in part by Codelco), El Salvador, Escondida, and the formerly active Potrerillos mine (1927-1959). Known as a strike-slip fault, the West Fissure Fault is characterized as having a fault surface or plane that is typically near vertical, with dominantly sideways motion between the two sides with minimal vertical motion. In addition to the substantial porphyry copper deposits throughout the area associated with the Cristal Project, substantial deposits have been found northwest in Peru’s Incapuquio Fault System. These two important fault systems are projected to intersect near the Project area and provide a favorable geological environment for the occurrence of buried porphyry deposits.